skip to main | skip to sidebar

If you look at the picture from my shopping trip yesterday (you can click on it to get a larger view), you will see that I bought a pile of very ripe bananas. My store was selling them in bags for 99 cents each. I weighed one and it was over 4 pounds, which means I spent less than 25 cents per pound - a very good price for bananas. I thought I would puree and freeze them and use them in smoothies or banana bread.

I am already planning to make my husband a birthday cake (a very decadent chocolate, his favorite) for his party this Friday, but last night my son and I were talking about D's birthday the next day and he said, "And we're going to have a cake with a candle in it!" Anticipating future events is not his forte (when we talked about D's birthday he said, "Isn't it my birthday tomorrow?" and when I told him it was in two months he said, "No, I think it's in one month."), so I realized that I needed to think quick and bake a cake today because he just would not understand celebrating a birthday without a cake. (Not a bad problem to have!)

I thought of all the bananas and how I planned to puree and freeze them today and decided to make a banana cake. After reviewing quite a few recipes I chose the one that included the most bananas (four) in the mix. I already had all the ingredients - including buttermilk that I bought for pancakes a couple of weeks ago and was hoping to use up this week - so the cost to make this cake was less than a dollar.

The person who posted the recipe says that it will also make great muffins and bread: That was enough encouragement for me to puree all of the bananas in batches of 4, seal them in bags, and store them in the freezer until the next time we want a yummy treat.

The recipe calls for 8 inch round pans, but I used 9 inch because I wanted the layers to be thinner and provide more surface area for the delicious chocolate frosting. :) If you follow my example you should shorten the cooking time to around 25 minutes (but it depends on your oven - take the pans out when the cake is slightly browned and pulls away from the pan). 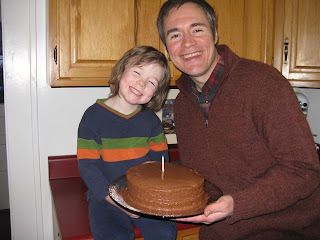 And take it from me, that was one amaaazing cake. Thanks so much!

Stacey
I'm a mama and midwife living in Western North Carolina with my husband, son, four chickens, and too many wild birds to count. Oprah says intention rules the earth and I agree. This blog documents my intention to live a joyful life! I'm also a life coach! You can find me wearing that hat at www.midwifeforyourlife.com